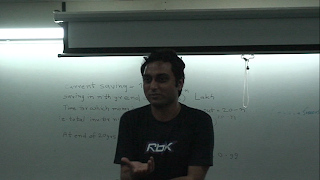 The very first session of Reflections kick-started on the 4th of March this Thursday with an informal talk by our very own Ashutosh Mishra of SOM-10.
Ashutosh shared various experiences of his life @ SOM, its ups and downs...smiles and frowns... the do’s n don’ts... the naughty and the enterprising! Laying stress on the importance of intra-batch interaction, he said that such interactions, especially in the early days when we just about join the institute, are crucial for they initiate the process of opinion-building and that staying back in the room... and interacting less does not get along too well in an MBA kind of a set-up. 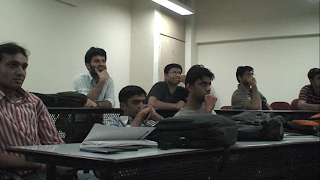 He also shared with us, various experiences of his, where he stuck to his “never say die” attitude and derived maximum value out of whatever he pursued during the course of his stay at IIT Bombay. Ashutosh was quick to point out that being a part of SOM was in itself a big thing for him... and that feeling driven by a strong passion allowed him to achieve whatever he has till date during his stint @ SOM. One of the toppers of SOM-10 batch, Ashutosh wasn’t too comfortable when he was labelled as a pure ‘geek’... n he fast proved it wrong to everyone else by virtue of his multi-faceted accomplishments! Ashutosh thanked his friends from SOM-10 for being a part of one of the best times of his life... full of enjoyment and learning. 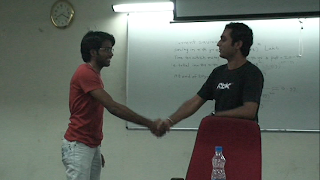 Now that Mr. Ashutosh is placed in a reputed firm... with a hefty package... and the fact that he is trying hard to keep his body fit (extra hours of baddy n tennis)... it won’t be too long for him to find the RIGHT ONE for himself! ;)
Here’s wishing Ashutosh All the very best...for the serendipity that awaits him!
Cheers!
(Paritosh – For Team Reflections)
Watch out for more such sessions with stalwarts from SOM-10!
PS: Special Thanks to Pavan for arranging the session.
Posted by SJMSOM at 10:47 PM