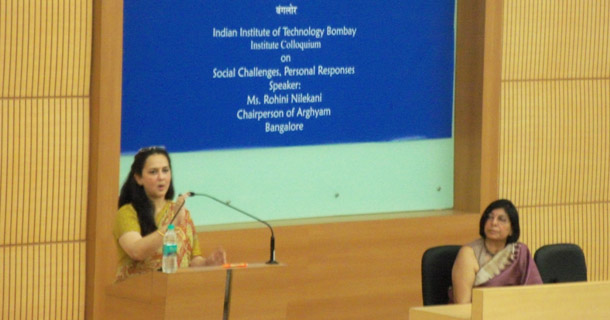 The IITians experienced an enthralling lecture by Ms. Rohini Nilekani, Chairperson of Arghyam
Foundation on March 4th, 2011. Ms. Nilekani’s association with IIT Bombay dates back to more than 3 decades when she was an enthusiastic youngster visiting IIT for its most hyped cultural fest, Mood Indigo and her further association was through her better-half, Mr. Nanadan Nilekani, an illustrious alumni of IIT Bombay.
Ms. Nilekani mentioned that the more the things change, the more they remain the same and that this is an ironic fact of the universe. She said that the major problems facing the world today can be represented by the EEE model – economic, environmental and ethical challenges.
Ms. Nilekani opined that we need to find out an alternate way of co-existing with the nature without depleting the resources and that this is one of the major economic challenges we face today. She reiterated this fact with some anecdotes and live experiences she had while working with tribals in South India.


Further, she stated that invasive plant species such as land Canna have spread rampantly across India and have depleted the local biodiversity. She also enlightened the audience with some lesser known environmental facts. The audience was surprised to know that bamboo which flowers once in 40 years has suddenly started flowering in the forests of Karnataka and that this means loss of food for around 6000 elephants because bamboo dies after flowering!! Several such examples inspired the young audience to sit up and take charge of future of this Mother Earth.
In addition, she felt that man is increasingly becoming an island these days and this is the root cause of all the ethical challenges Indian society is facing today. Commenting about her entry into this sector of social upliftment, she said that she owed a moral responsibility towards the “aam aadmi” of India who made people like her rich in a very short span of time. She also spoke about the various activities undertaken by her NGO’s in education, environmental, clean drinking water sectors. There was further discussion about the markets, technological advancements, knowledge management and so on.
She ended her lecture with an advice to the future of India that everyone needs to follow – “Damyata – self-restraint; Dayatva – Compassion; Datta – Helping tendency”.
Nagaswetha. T. S
SOM 12
Posted by SJMSOM at 8:35 AM