“The whole purpose of education is to turn mirrors into windows” 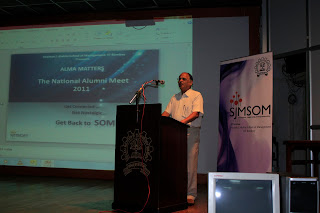 ‘Alma Matters’ – the annual National Alumni Meet of Shailesh J. Mehta School Of Management, IIT Bombay for the year 2011 was materialized on 27th August amidst heavy showers and cloudy skies. The weather almost threatened to play spoilsport but the excellent organization by the Team Alumni and the promises kept by all the Alums enabled the meet to kick off in superlative fashion. The P. C. Saxena Auditorium was all ready by 3pm to greet its ex-inhabitants and as it filled up with time, so did the enthusiasm of the crowd. The warm welcome address given by Professor Anand Kusre,  made everyone feel back at home and to where they rightfully belong. The rain kept on coming but the show was just warming up. Professor Ashish Pandey took the stage next as he enlightened the Alumni on the the change of the course  and credit structure for the 2013 batch. This was of special significance because the Alumni were also a part of the restructuring of the old curriculum. There was a resounding support for the new “open-minded” syllabus as Prof. Ashish Pandey went through its intricacies. As the stomachs rumbled, piping hot snacks were served and the scene resembled a huge family get-together. Post-interval, the programme took off with the much awaited Panel Discussion consisting of eminent personalities like Mr. Sanjeev Chachondia, Batch of ’97, Ex-CEO of Loop Mobile; Mr. Prabhat Paani,PhD Scholar and CEO of Ginger Hotels and Mr. Rakesh Pundir, Batch of  ’97, VP of Idea Cellular with Prof. Shishir Jha acting as the moderator. Everyone was asked to share their experiences at SOM and what is that one thing at SOM that they still carry with them. Then the discussion moved onto new territory with discussion on skillset driven approach to learning and ethics. It was a high-IQ, highly motivating discussion with the panelists talking  about how SOM helped them to unlearn the past learnings and relearn them with a new perspective, made them realize that it was the small things you did that made a difference, and that a greater part of the learning happens outside the classrooms. It was many years of learning and experience in a capsule. After the enriching experience, it was time to cool down. 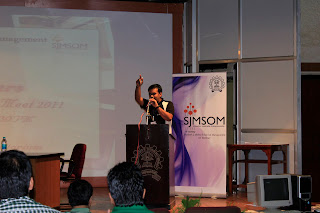 Rakesh of SOM ’12 stepped onto stage and brought the house down with his one-liners, strange “quizzes” and identify the personality rounds. Faculty and ex-students whole-heartedly participated in the show, won prizes and laughed their heart out. 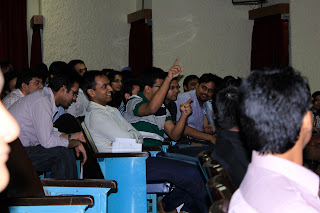 Then it was the time for the re-branding excercise. You could know its an Aarti Ma’am initiative by the sheer innovativeness of the concept – a fun  marketing excercise for the re-branding of SJMSOM, which was quickly lapped up by both the young and not so young audience. The fun wasn’t over yet. The culturals began with a brilliant, nostalgic rendition by Rajat Sharma with Deepankar Boro handling the strings. The group dance by SOM ’13 was total non-stop fun. The activities at the campus came to a close with the video created exclusively for the event. The thunderous applause by the audience at the end of it all said it all. 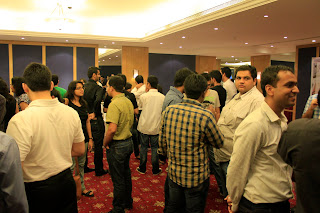 The scene then shifted to Rodas, the extravagant ecotel in Hiranandani Gardens where dinner was waiting for the guests. An excellent venue for a networking dinner, the Rodas in no time transformed into a high-profile dinner party and an old buddies’ gathering rolled into one. The food was sumptuous to say the least, with dishes varying from Continental to Italian to Chinese to good-old-Indian. It was a very pleasant sight to see students from the 2012-2013 batch talking to Alumni of the 1997 Batch and still having common topics to talk and smile about. It was even better to see their families bonding with each other. All in all, a remarkable Saturday – thanks to an efficient Team Alumni, without which an event on such a grand scale would have been unimaginable. And as we prepare to celebrate the Crystal Year of the first ever batch to graduate from SJMSOM, next year, a huge THANK YOU to the Alumni Team for laying the foundation.
--Sanju Mathew George, Batch of 2013
Posted by SJMSOM at 11:25 PM