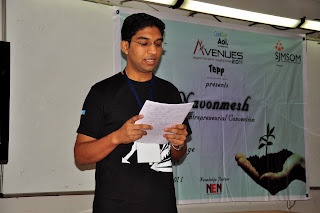 How do I make my business plan attractive to investors? What is the right valuation for my business?Do investors invest in people or just ideas? These were some of the dissecting issues unraveled during Navonmesh, the entrepreneurial convention, providing platform tobest young business minds of the country at Avenues 2011, the annual business festival of IIT Bombay.Huge participation was received from B-Schools all over the country. The event saw participation from major B-schools like IIM C, IIM Shillong, NITIE etc.
The pre-event ‘E-cumen’ quiz was conducted on 22nd September which witnessed participation from more than 80 teams from various B schools. The unique structure of Navonmesh began with the workshop “Praarambh”, conducted in partnership with NEN, on 9th October which was graced by Mr. Sudarshan Narayan, Founder, Hatch Incubation Services and Mr. Mohit Dubey, Founder of renowned website CARWALE.com, providing valuable insights to budding entrepreneurs. Providing a helping hand in taking innovations which are at a nascent stage to the market was the central theme behind formulation of business plan and VC challenge competition in Navonmesh. Technopreneur Promotion Programme (TePP), which is India’s largest network program supporting Independent Innovators, partnered Navonmesh in selection of promising innovations. Business plans were presented by different teams on the chosen four innovations - multimodal interaction systems for urban children for playing computer games, ready to install biogas plant, novel internal combustion engine with magnetic flywheel and India specific sugarcane harvester. The judges for b-plan competition - Mr. Krishna Jha, Partner at Telnet Ventures and member at Indian Angel Network and Prof. Kirankumar Momaya, SJMSOM, IIT Bombay grilled the teams on different aspects of their business plan and were truly impressed with the quality of the efforts. The team Dark Strength from NITIE emerged as the winners of B-Plan competition while the team Deja-Vu from N.L.Dalmiya emerged as the runners up. 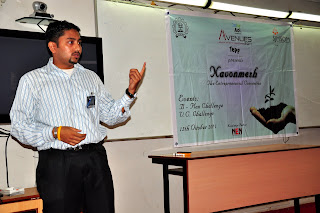 The VC Challenge event then provided an opportunity for participants to step in to the shoes of an Investor, wherein the VC Challenge teams presented their strategy and valuation of the market opportunity of innovations presented by business plan teams. The judges for the VC Challenge event were experts from investment domain - Mr. Pankaj Nagar, Director, Standard Chartered Bankand Mr. Vinayak Kamath, Managing Director, VIVA Corporate Advisors Pvt. Ltd. The final league of Navonmesh began with the Faceoff round wherein the teams participating in the final round of B-Plan challenge and the VC challenge met face to face to negotiate the terms of the deal to finance the investment. The VC Challenge team was earlier given opportunity of performing due-diligence and interacting with the B-Plan team to sort out any queries. Some tough and grilling negotiations were witnessed on the faceoff table as each team tried to convince their business formulation and strategies in a toughly fought competition. The team Growth Partners from NITIE emerged as the final winners of the VC Challenge event.
The entrepreneurial journey in student community that began from preparing a B-Plan, facing the VC-Analysis and finally cracking a deal with the VC was raised to greater heights in Navonmesh 2011.
- Ankit Bhansali, Class of 2013
Posted by SJMSOM at 4:48 PM