We saw them lose in Melbourne, then in Sydney and Perth was just around the corner. The cricket buzz was fading away with one loss after the other, until it was revived by the Fantasy Cricket League 2012. The hallmark IPL style event open exclusively for the students of Shailesh J Mehta School of Management, IIT Bombay was managed, hosted and played by the students themselves. 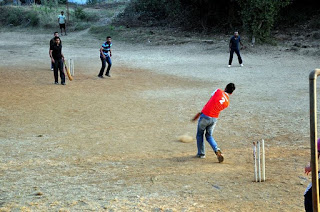 Carrying on the baton from SJMSOM’s FCL 2011, the format had no changes except for a new set of innovative names, icon players and a few surprises. The auction was slated for Friday the 13th, but the organizers expected a dismal performance from the Indian team. Because it would again be a humungous task to revive the enthusiasm in a victory-deprived season, the FCL core committee conducted the auctions in SOM Foyer on Thursday. FCL 2012 auctions comprised six teams, six icon players, twelve mangers and a pool of 74 players. The teams and its icon players were as follows:
Each team had 15000 points in their kitty and the base price of all players was 100 points. When the name of the player was read, he came to the auction stage and gave a brief about his cricketing skills. The auction was on and the team managers with their icon players were fiercely fighting for the best of the best. Mohammed Suhal Aslam of SOM’13 bagged the highest sum of 5500 points while yours truly, Tippu S, came out as the second most valuable player for 4600 points and the coincidence being that both are wicket-keepers. Dhoni has changed the Indian mindset indeed! The costliest player of each team is given in the table below:
After an auction session that went on for 3.5 hours, the teams were made and the lots were decided for the group. Two groups containing three teams each played against each other within the group, in the group stage. The groups are as follows:
On Saturday, the opening match in the winter morning was between SKC and LP. With a thumping victory SKC moved forward while in the afternoon NF made it count against SS, with SS losing their costliest player to an ankle injury. LP was left with a mediocre team with their best player Neerad available only for the Semi-finals stage, but the question looming large over their heads was if they would qualify for the knock-out stage. 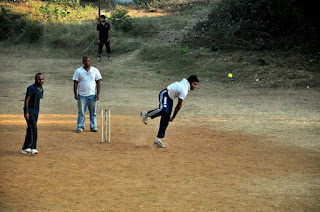 On Sunday, the first match was reduced to a stand-up comedy show when DC was allout for a paltry score of 20 against NF and NF became the first team to enter the knock-out stage. The second match was a cakewalk for SKC where the Cheetas ate the Baarah Chichoreys for a sumptuous breakfast. With a comedy of errors, SS were bowled out for 9 runs. Yes, just 9 runs by DC, who had earlier in the day made only 20. But, this time they had made 44 runs in the first innings, so they won comfortable by 35 runs and made it to the knock out stage. LP and BC clashed for the last spot in the semis and BC made the last cut. And this is where it stands as of now:
After all these matches, one question ubiquitously remain unanswered, “How to get Rakesh Tanwani out?” For everything else, the action awaits the next week!!