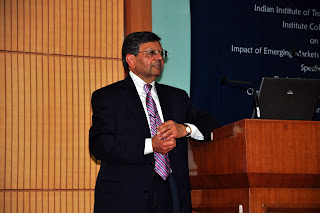 Dr. Jagdish (Jag) Sheth is the Charles H. Kellstadt Professor of Marketing in the Goizueta Business School at Emory University. Prior to his present position, he was at the University of Southern California (7 years); at the University of Illinois (15 years), and on the faculty of Columbia University (5 years), as well as the Massachusetts Institute of Technology (2 years).
His insights on global competition, strategic thinking and customer relationship management are considered revolutionary. Professor Sheth has published more than 200 books and research papers in different areas of marketing and business strategy. Many of these are considered classic references. 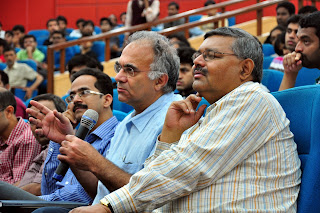 He graced SJMSOM with his presence on the occasion of the institute's colloquium on 17th January 2012. The topic of his talk was ‘Impact of Emerging Markets on Innovation’. He went on to talk about a fundamental shift in global growth from ideology centric policy in mature markets to market centric policy in emerging markets. This shift was attributed to a few factors like the aging population of affluent countries, economic reforms in developing countries, the rapid rise of the ‘call centre couple’ or the brand conscious middle class which created a huge wave of new markets and an advantage of abundance of resources whether it be human, capital or industrial. After this combined analysis if the growth of India and China, he spent a few minutes reflecting on the differences between these 2 giants. The forecast here was that china’s growth would slow down after 2020 thanks to an aging population and a 1 child policy while India’s growth would gain momentum with help from investments in infrastructure and reforms in industrial policy. He was of the opinion that we shall be looking at Africa’s emergence with great excitement after 2020. He spoke about the impact on resources and markets in detail predicting fusion of market and cultures, a shift of R&D to Chindia, resource driven global expansion, rising upstream profits and global mega mergers.
Coming to the focus of his speech, he listed the implications for innovation due to the emergence of Chindia as follows
He concluded saying that global growth would be driven by the markets and resources of emerging nations and that scarcity, affordability and sustainability would become the foundations of innovation. He later opened the floor for questions.
It was an hour of riveting insights peppered by disarming humor. We look forward to more of his enlightening talks in the future.