Banker to the poor joins the Bandit King

The lecture should be over by now. The time is 06:00 p.m and it is outrageously extended by half an hour. The movie is about to start anytime in the auditorium and I am atleast 400 m away from it and to add to the woe, it is an uphill run. If I am late, I know for sure that I am not going to get a seat. The lecture finished by 06:15 p.m. and I rushed out of the class. Prashant, Ashish and I climbed the slope and gasping, made it to the entrance. The show was about to start – the time was 06:30. After apologies from the ushers, the movie started at 7 with a packed hall.
The hero of the movie, Prof. Mohammed Yunus ran the storyline depicting his life-changing, revolutionary Grameen movement, with Mr. Hans Reitz, Founder & Creative Director, Grameen Creative Labs in the supporting role. The picturesque dialogue-filled power-boosted two hours was beautifully crafted by Mr. Shekhar Kapur, critically acclaimed director and producer. Background scores were replaced by powerful dialogues and the life experiences of the three eminent personalities. Within a few minutes I found myself lost in the deep thoughts that they provoked. 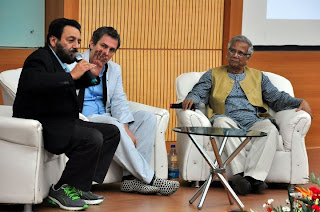 “An idea can change the whole world” was the first dialogue of the movie from Mr. Reitz and the idea was social business. Prof. Yunus took over from there and enlightened us on how he saw a business opportunity in every social problem. And he reaffirmed the fact that, a social problem can be solved only by a social business solution and definitely not by a business that runs after money. He clearly explained how social business was different from charity. In charity, people donate money, money is used, money runs out and the needy people are back to square one. But, in a social business, one creates sustainability. As Mr. Kapur rightly said in the latter half of the movie that, “We give a mango sapling. People plant it, grow it and sell the mango and create a sustainable business. But, in charity, people are made to eat the mango sapling.”
Kapur started scene no.2 with “We live in a world where, all we are concerned with is how to survive, live and exist happily by exploiting rather than doing good for the community. In this world, we are not becoming closer, but we are being compressed. We don’t have enough resources. What we have to do here is to stop comprising and shift our paradigms”.
The comprising attitude in human beings gave way to the next topic of discussion – empowerment of women. Reitz felt that the role of women plays a very important part in developing a community, to which Prof. Yunus replied, “The loan sharks deny loans to every woman. They ask have you consulted your husband about this. Why don’t they ask a male, if he has consulted his wife about his loan plan? Why does the inequality exist? Why put doubts in the minds of women that they can’t handle money? We changed that. 97% of Grameen Bank customers are women and they own the bank. And what do the feminists have to say? They attack us, saying we have given women so much power that they are not handling the day-to-day activities of a family. My question is who is a feminist here. Because women are involved in the banking system, responsibility is taken in the development of children as well. And there we created a social business answering a social problem.”
Prof. Yunus then touched upon Grameen Shakti. “The solar energy arm was formed 15 years ago in a country () where 70% of the population lived in centuries of darkness. With reducing solar panel prices, we are envisioning a day where every house will have a Solar Home System. We go a step ahead and train school drop-out girls in assembling the system through which they learn the maintenance aspect of the system as well.”
To a question on how the young generation will make a turnaround with social media from Reitz, Kapur answered, “We don’t need an editorial for social media. Everyone feels that social media is too chaotic. But, there is nothing more chaotic than our community and hence social media will balance it out. We can still run a country if we replace the Members of Parliament with a huge computer and guess what, we will work with improved efficiency.”
Corporate dominance has been a thing of the present and Reitz asked Prof. Yunus on how to circumvent it. Prof. Yunus opined that one doesn’t need to circumvent it, rather go through it. He quoted real-life examples of how Danone created delicious and nutritious yoghurt to eradicate malnutrition in . Danone called it the most powerful yoghurt in the world. Similar talks with the chemical giant BASF has also yielded benefits in converting the patents which are not being currently used into social businesses. Prof. Yunus approached Adidas and asked them to set their vision as “Every person in the world will wear shoes.” Adidas replied saying, “This is a big goal” and Prof. Yunus politely replied, “You are a big company!” Their project is underway and soon a pair of shoes will cost less than €1 and it won’t be charity shoes.
Mr. Kapur speaking on the issue of water sustainability highlighted how important the resource is and how hastily we have been using it. It hasn’t dawned on us yet that water is a scarce resource. He said that within 10 years, River Ganga will be a seasonal one and in the next 25 years it would have dried up. He asked if we are ready to face that. If we aren’t ready to change it, no one will.
The best was reserved for the climax with Prof. Yunus’s speech addressing the young, vibrant IITB-ites. “You guys should change the world. You young people are the most powerful generation that the entire mankind has seen. You shouldn’t inherit the world that we are in right now. But, you should create your own new world. A world where there should not be a single person unemployed. A world that doesn’t know what hunger is. If you guys don’t do it, the next generation which will be even more powerful than you are, will laugh at you. Envision a new world and change it, because you are powerful.”
The movie ended with a thunderous standing ovation from the audience. There are lots of trivial things that you can get anywhere in the world but for things that make life interesting, you got to be in IIT Bombay. Many thanks to E-Cell, IIT Bombay for hosting such an event and we thoroughly enjoyed it!

“I believe that every problem has many solutions, and all that we had to do was to select the best possible alternative” – Yunus in “Banker to the Poor”