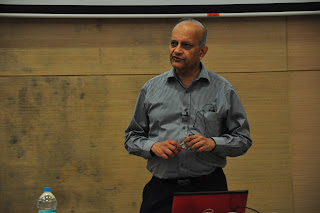 Jayendra Nayak has been Managing Director and Country Head, Morgan Stanley India, since April 2010. Prior to joining Morgan Stanley, he was Chairman and CEO of Axis Bank from 2000 to 2009. During this period, Axis Bank transformed from being a purely domestic bank with less than 50 branches to creating an emerging Asian footprint with over 800 branches including in Singapore, Hong Kong and Dubai. Earlier in his career, Mr. Nayak worked for the Government of India. Between 1990 to1995, when India embarked on economic reform, he was part of the Ministry of Finance, Government of India. He has an MA and a PhD in Economics from Cambridge University, UK.

He started out by describing the change in the Indian banking sector over the last 15 years. Most notable has been the entry of private sector players which have captured a large chunk of the market in a short amount of time. He also tied the growth of the sector to the growth of the economy. For both the developing economies of India and China, the ratio of non-working to working people has steadily decreased. In line with this decrease, the savings rate has steadily increased. China, in particular, has been quick to take advantage of this fact. He pointed out that this phenomenon has occurred due to changing demographics of both countries. As a result, India can look forward to enjoying this for another 25 years while China will have to start facing the inevitable downward slope.

Coming to innovation, he segregated it into 3 types of innovation


He highlighted the fact that Indian banking products are less complex in comparison to developed markets. He then went on to talk about the need for innovation in new products which should be propelled by the shifts in the sector towards securitized products, bond trading and fixed income derivatives and project finance. He also touched upon principle based regulation and regulatory oversight to cap systemic risks 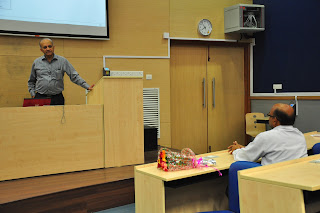 Coming to the innovation in process redesign, he noted that Indian companies have fared well in this regard. He emphasized on the connection between regulation and innovation. In India, regulation is generally conservative to new product innovation while fairly liberal on process and distribution innovation. In India, the market is structurally under penetrated which can be a good thing as it provides an imperative for growth. Assets will continue to shift towards the private sector in the coming years. He also put forth the point that centralization in public sector is less than that of the private sector.

Finally, he talked about the new trends in distribution efficiencies such as relationship managers for the mass affluent. The private sector has also appointed or outsourced a low cost sales force to target the masses for simple products like issue of credit cards, debit cards and cash management. He noted that the public sector in India has been very reluctant to outsource while the foreign banks in India have no interest in the mass sector at all.

With this, he concluded a very interesting and informative session. The floor was opened for questions, prompting interesting discussions on consumer mentalities and the future of the banking sector.
Posted by SJMSOM at 1:13 PM