Who's in Alankar, Avenues this time? - Part III

“I am not part of that group. I am not joining politics and will continue in the watchdog body on the functioning of administration and political parties.”
He was a key member of India Against Corruption, the movement led by Anna Hazare, and his above statement shows his aversion to joining politics.
He is a highly respected figure in the legal circle. Born in a family to a Supreme Court judge, he started his legal career in 1966. He was the Advocate General of his state of residence for 1984-88, before becoming the Additional Solicitor General of India for 1988-89. He became the Solicitor General of India for 1998-2005. He is the only person from his state appointed for this post so far.
As a former Lokayukta of Karnataka, he has taken his anti-corruption crusade to a next level by exposing a high profile scam, which involved some ministers of the state.
Welcome Justice Santosh Hegde! 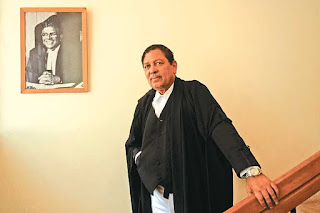 
Avenues 2012. Beyond Horizons, Beyond Limits.