Praarambh, as always, was organised as the first event of Avenues: The Business festival of IIT Bombay.  The main theme of Praarambh 2012 was to make the audience familiar with the process of developing their ideas and moulding them into a business plan. 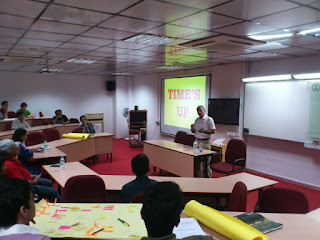 Praarambh is a precursor event to Navomesh which is a flagship event of Avenues. Navomesh provides a platform for budding entrepreneurs to hone their ideas and present them in form of B-plan. It also provides them an opportunity to pitch their ideas before different Venture capitalists. This year as part of Praarambha we had with us Dr. Meenaxi Dhariwal who is senior faculty at ICFAI Business School, Mumbai we also had with us Mr. Vikas Verma founder of “The Color Factory”. From IIT-Bombay we had with us Prof. Amarnath who is one of the most senior faculties at IIT-Bombay.
The event began with Dr. Meenaxi Dhariwal asking participants about the ideas they have which can be turned into profitable business. After this small exercise, three Ideas were chosen and divided between 6 groups. Each group had to come up with a best proposal in 30 minutes and pitch its idea within 10 minutes followed by 2 minutes QnA session from the other group working on the same Idea. The groups had access to sketch pens, card papers, sticky notes etc and they were encouraged to be as creative as possible. The participants coming from different backgrounds suddenly started working as a group and each group tried its best to complete the task as efficiently as possible. The group task gave participants a firsthand experience about what it takes to mould an Idea into a business plan. 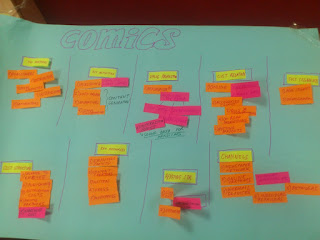 After the workshop by Dr Meenaxi Dhariwal, we had a terse but very insightful speech from Prof. Amarnath who is the professor in charge of SINE and E-Cell at IIT-B. Prof. Amarnath shared three important drivers for a business to succeed. He also made the students realise the importance of simple things such as team work and how it plays an important role in creating a successful business.
The last session was taken by Mr. Vikas Verma, Founder & CEO, The Colour Factory. Vikas Verma, himself an angel investor, gave participants insights into what an investor looks for before funding a business. He made the audience aware of different investor forums in India. He also pointed out that at what time or maturity should they take a decision of approaching an angel investor or a venture capitalist. Last but not the least, he shared his valuable past experience with the audience and answered all their queries on how to create a business plan and pitch their ideas before a venture capitalist.
The session proved to be a knowledge packed session with a lot of fun activities. At the end of the day all the participants gathered got a detailed insight into what it takes to bridge that gap between Idea and Business.