Another entry for "Penning SOM Thoughts": A Story worth telling... by Shashank Chepuri


A story worth telling…

It was the last day of my life at a B-school. As I stared at the banner which, read “Farewell to 2015 batch”, my mind was flooded with memories of how this amazing journey began. It was, perhaps, a story worth telling. 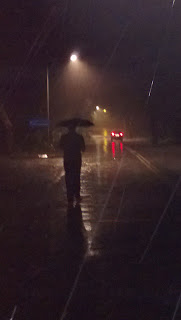 It all started on January 9th, 2013. I lay asleep in my hostel room when my phone started vibrating.

‘Hello, Ma!’ I said, without opening my eyes. Guessing the name of the person on the other end of the call was no rocket science. Of all the people in my contacts my Mom was the only one who would rise daily at 6 am.

I tried opening my eyes but they refused to obey.

‘Good Morning, Beta!’ the voice at the other end of the line greeted me with an elated tone.

I greeted her back, my eyes still closed.

She allowed a pause to creep into the conversation. It was as if she wanted to stress on the words which she was about to utter.

Her excitement got the better of her and she said something which left my eyes wide open.

‘A good percentile in CAT is only half battle won. The easier half, to be precise. Converting a B-school call is the tough part. I emphasize tough’, I heard one of my friend say.

‘How tough could it get’, I asked myself.

For no particular reason I like doing things which are termed tough.

The memories of the “9th of Jan” flooded my mind as I read the mail. 9th January, the day when the results of CAT-2012 were declared. My mom had revealed my score to me over the phone call that day. My score was good enough to land me calls from some of the respected B-schools in the country. And now, two months later I had converts from a couple of them. It didn’t take much time for me decide which one would I be joining.
***

"An umbrella can always come handy; consider packing a boat in case your B-school is in Mumbai", the website had read.

Now I knew they were not joking. The date was 12th July, 2013. It was 6:00 am by the time arrived at the campus. Mumbai Monsoons had left no stone unturned in welcoming me. Calling it a warm-welcome would be an oxymoron, considering the low mercury levels.

I don’t exactly remember much about the Induction session; apart from the fact that it was heavily loaded with Alum Sessions and guest lectures.

The next two years flew past us. The continual stream of assignments, case studies, extra-curricular activities, Industrial Sessions etc. managed to keep us on our toes. Life at a B-school teaches you that night outs are overrated and how they could leave you craving for a good nights’ sleep.

Now two years later on the eve of my farewell I can’t help but retrospect my life at B-school. The memories of the frequent visits to Gulmohar, the epiphanies at the Powai Lake, late night discussions in ANC flooded my mind as if they had happened just yesterday. All these are just the icing, the real cake is the people I have befriended here: all of my batch mates, most of my seniors and some of my juniors.

If given a chance, I am sure each and every one of us would want to re-live our last two years again, not because we wanted to change anything; but because it was worth re-living. Life at a B-school is an enriching experience which would be treasured by everyone who experiences it.

In case I didn’t mention; my name is Shashank Chepuri and I am a student of SJMSOM – IIT Bombay.
***
The End? A New Start? You choose…
Posted by SJMSOM at 10:39 AM